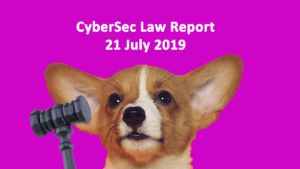 Orlando Ends Facial Recognition Program Orlando, Florida officials announced the city will end its testing of Amazon Facial Rekognition technology due to lack of resources. No report on how the facial recognition technology performed was released. The statement from Orlando’s Chief Administrative Officer, stated that Orlando will not be pursuing any other facial recognition programs […] The post CyberSec Law Report – 21 July 2019 appeared first on AskCyberSecurity.co